When it came to picking an infant car seat for Piglet we had things pretty easy. I wanted a 5 point harness, and there was an offer on when we bought our pram that gave us a free infant car seat. So we took it and that was that!

Moving on to the next stage car seat has been a whole different kettle of fish though. I have found myself really quite fussy about what I want for Piglet, and I put that largely down to an increase in knowledge. I want extended rear facing for him, isofix connections and ideally one that will swivel to make getting him in and out easier.

So not fussy at all really am I? Thankfully the Maxi-Cosi AxissFix Plus has come to the rescue. As soon as I took the seat out of the box I loved it. We have it in the “Nomad Green” colour and I really like it, but there are 11 colours in total to choose from. It felt really robust, and I was keen to see how it worked. The newborn insert looked great, but I removed it straight away so that Piglet could use the seat. 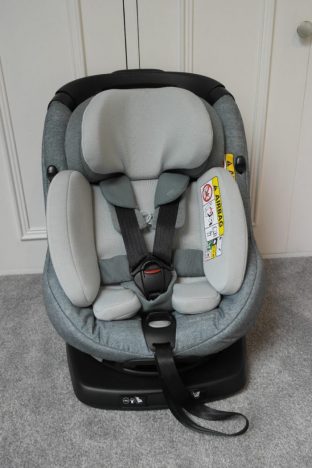 The attention to detail is what makes the seat stand out for me. On our previous seat I found that the pads by Piglets shoulders would slip down, meaning the straps would sometimes rub against his neck. On the AxissFix Plus the pads are secured at the top, preventing them from slipping down which is perfect for us!

Also on the straps, there is a little loop on each side. This is to hook over a small peg on either side of the seat, holding the straps in place while you get your child into the seat. It is simple but so effective, one of those little features that makes life much easier.

The swivel feature is simple to use. There is a switch on the front for you to select whether you want to use the seat in rear facing or forward facing, and that prevents it from spinning 360° in one go.

As novices in the car seat installation stakes we found it a little tougher than expected to get the seat in to the car. The instructions have images but no written instructions which we found a little more tricky. We got it in though and went about getting it set up for Piglet.

To help you, I have filmed the installation so you can see how it is done.

The head rest moves up and down easily. There is a button at the base to press when you want to loosen the straps, and then another strap to pull to tighten them again. I have found the button a little stiff to press, but I am assuming it is going to loosen off with use.

Now we have installed the seat once I am sure we will remember how to do it again. Just in case though, there are handy reminder images on either side as prompts.

Putting It To The Test

Piglet took to the Maxi-Cosi AxissFix Plus straight away. He had started arching his back when he was being put into his infant car seat, but he is so much happier now. I don’t have to fight with him to get in and he happily chatters away to us. You can recline the seat slightly, which is what we have done. Piglet still often naps in the car and I now find that his head hangs forward quite a lot. The recline is not quite enough to keep his head back. For that reason, I personally don’t think I would be comfortable putting a newborn into it. This is purely my opinion though, and it is nice to still have that option if needed. I am really loving the Maxi-Cosi AxissFix Plus. Piglet is much happier in is big boy seat, and still naps quite easily in the car. The fact it can be rear facing until 2 years old is a major plus for me, and would be the main selling point as far as I’m concerned.

The 360° rotation is fab and has been a lifesaver for getting him in and out of the car. The age range is big enough that I don’t have to worry about replacing it any time soon, plus I have the flexibility to have one of my nephews sit in it if the need arises. We have been using the Maxi-Cosi AxissFix Plus for 8 months now and I still love it. We are pro’s at installing it when it needs to be moved between cars, and all the issues we found when we first did it seem quite silly!

Piglet is not quite 2 yet, but has outgrown the height limit for rear facing. He has been forward facing for around a month now and thinks it’s great fun. He is not exceptionally tall for his age, so I was surprised to reach the height limit 2 months before his birthday.

The swivel feature is saving my sanity when I have a toddler throwing a tantrum to get into the car. I am now pregnant with baby number 2 and it means I don’t have to lean around my bump to get Piglet strapped in.

Despite having a toddler using it daily, the seat is in almost perfect condition which really surprises me. It gets a quick hoover on occasion but that is the only care we have had to give it in the last 8 months.

It is still by far our favourite car seat that we have tried to date.

I was sent a Maxi-Cosi AxissFix Plus for the purposes of a review. All words and opinions are my own.